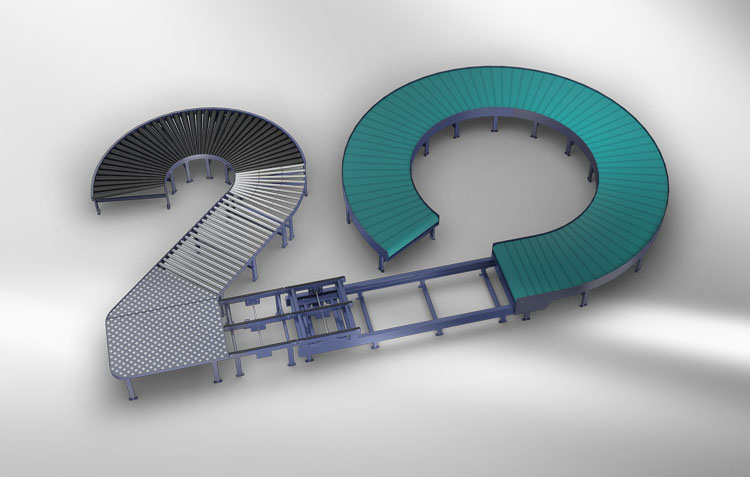 This year’s company anniversary is a fitting occasion to review the past 20 years. From the founding year 2000 to the anniversary year 2020, the company has recorded many increases, undergone changes and mastered crises. The orientation has changed and constantly adapted to the spirit of the times and ALFOTEC has always been able to attract attention with new and innovative ideas. In the early 2000s, the initial period was still characterised by individual conveying elements, which were only occasionally sold together as systems, and heavy-duty transport only played a limited role. Over the years and through the expertise of the constantly growing team of production and sales partners, many new systems and solutions were developed.

ALFOTEC GmbH broadened its portfolio and in addition to the existing conveying elements, it was also able to serve the special machine construction sector and respond to the many individual requirements in the German and European market. In addition to the growing variety of products, safety technology became more and more relevant. ALFOTEC took up the requirement that machines must be designed intrinsically safe and, mainly in automated systems, must be protected against access from outside, and provided its own safety experts for this purpose. Together with several company-owned assembly teams, an all-encompassing mechanical project planning is possible.

ALFOTEC goes GROUP
At the beginning of the company’s history the production was limited to one partner company in Poland. Over the years new production sites in Hesse, Saxony and recently also in Southern Poland were added, which today form the ALFOTEC Group. Each of the three production locations has its own specialisation, but due to the long lasting cooperation and collaboration among each other, they are able to build almost every element and design. In order to get an overview and to look at the most important milestones of the company history, they are presented below.

History of the ALFOTEC Group

Milestones in our success story 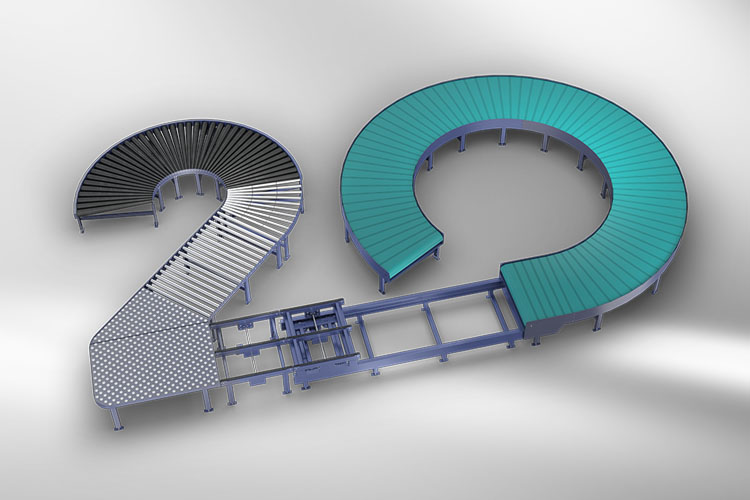 2020The ALFOTEC Group turns 20 years old and renews itself

Not only the new logo and internet presence stand for the innovative strength of the ALFOTEC Group, but also a multitude of other innovations which will become visible in the course of our anniversary year. Ute Höfer was appointed as our new authorised signatory. Furthermore, the shares of ALFOTEC were sold to Lukas Hackländer and the two managing directors Silvia and Michael Hackländer were recalled. 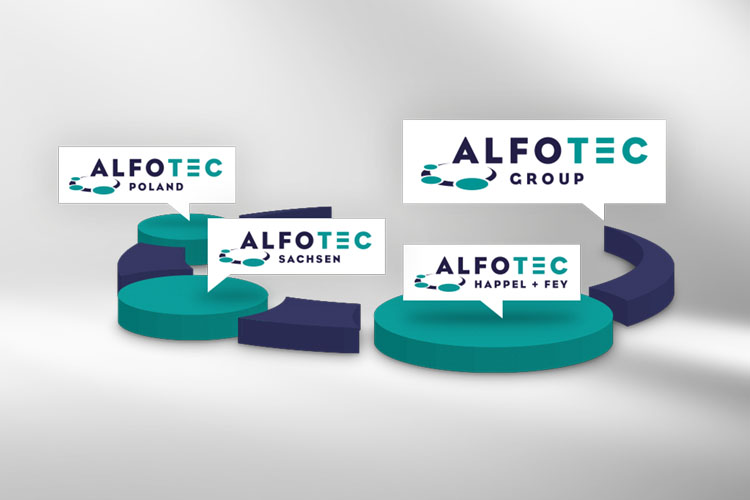 Today ALFOTEC is firmly established in the European market as one of the leading suppliers of conveying elements, segments and systems for the internal material flow of heavy loads. The entire team is working consistently to permanently expand and improve its range of services with fresh ideas and innovative technologies, with the aim of further strengthening and expanding ALFOTEC’s market position. 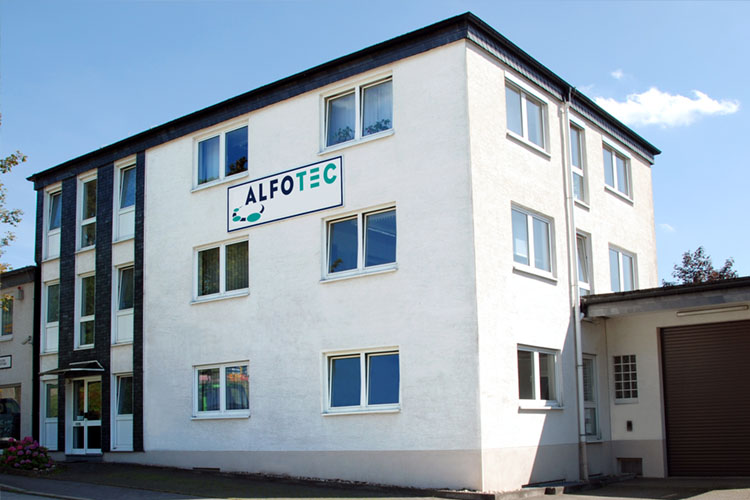 Start 2000Into a new millennium - The founding year of ALFOTEC GmbH

At the beginning of the new millennium, 43 years after founding his parents’ company, Michael Hackländer goes his own way and founds ALFOTEC GmbH in Wermelskirchen. The start took place in 2 small offices in the district Wermelskirchen/Tente. Afterwards the company moves to Handelsstr. 16, which, however, after only half a year no longer meets the spatial requirements. Thereupon the offices in Albert-Einstein-Str. 12 are moved into, first on one floor, after a short time the second floor and finally also a third floor. The focus is initially on individual elements such as roller, chain and belt conveyors and idlers. 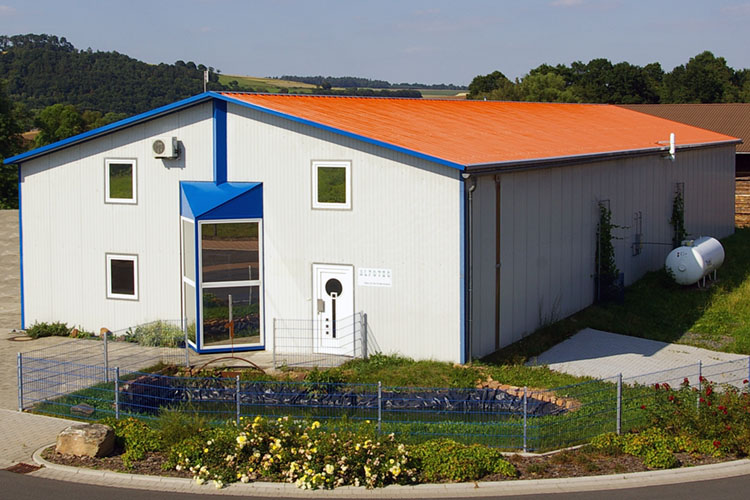 With the company Happel Industrietechnik, around Albrecht Happel, Patrick Fey and Oliver Becker, ALFOTEC gets an important new sales and production partner in the strategically well located Schlitz in Hesse. With the company’s many years of experience in the construction of special purpose machines, the foundation for the future orientation of ALFOTEC GmbH is laid and the possibility is created to now also offer own solutions for control technology. 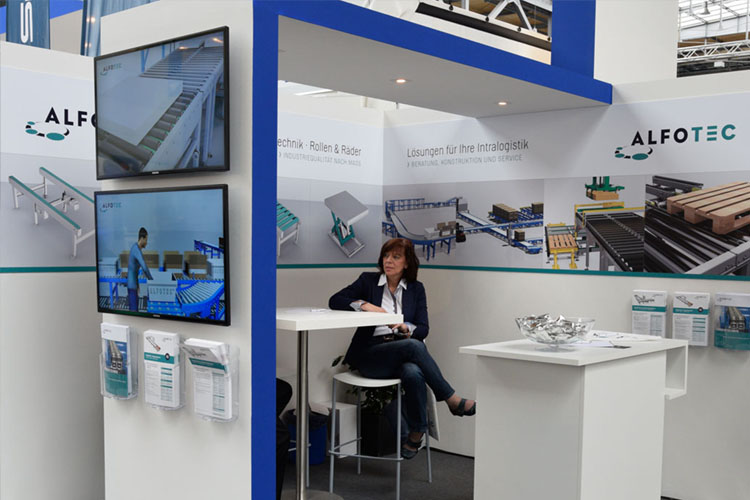 In 2005 ALFOTEC GmbH exhibits for the first time at CeMAT in Hannover. This will be followed by other trade fairs, such as LogiMAT in Stuttgart, where many interesting contacts were also made. A direct consequence was the expansion of a sales network throughout Germany and Europe, from which successful partnerships and co-operations have developed to this day.

In the same year Thomas Wolnik, as sales partner for East Germany, joined ALFOTEC GmbH and already took over some small rush orders which he produced in his own workshop. 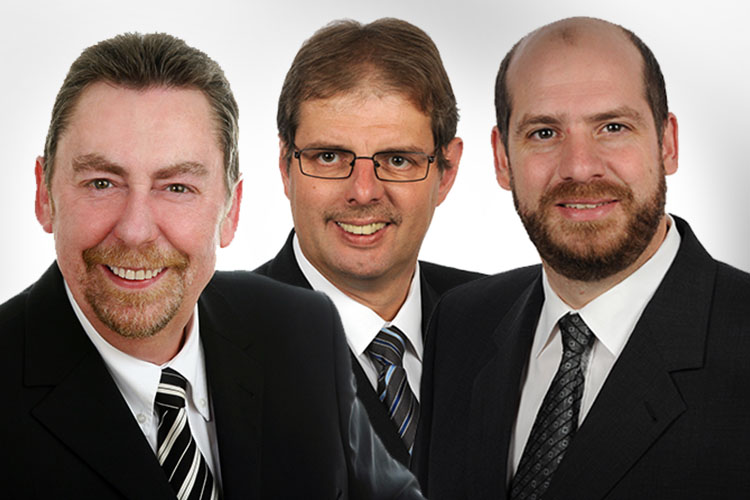 The company is expanding: At the beginning of the year ALFOTEC Happel und Fey GmbH is founded, named after the three shareholders Albrecht Happel, Patrick Fey and ALFOTEC GmbH. The company is located in Schlitz, Hesse, near Fulda. The ALFOTEC Group is established and the production programme expands, especially in the field of special purpose machinery. 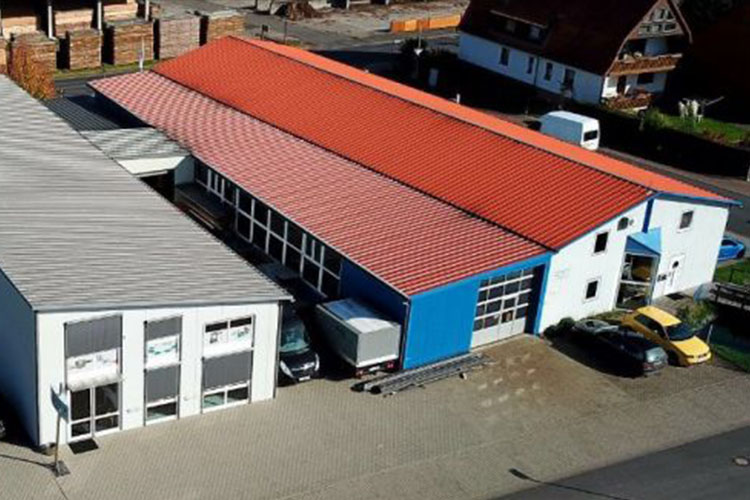 Almost two and a half years after its foundation, the Schlitz site is expanded by two halls. Since then the ALFOTEC Group has had 2,000 sqm of production, office, storage and open space at its disposal. A team that has grown strongly in the meantime guarantees high-quality conveyor systems and thus increasingly defines the ALFOTEC standard. 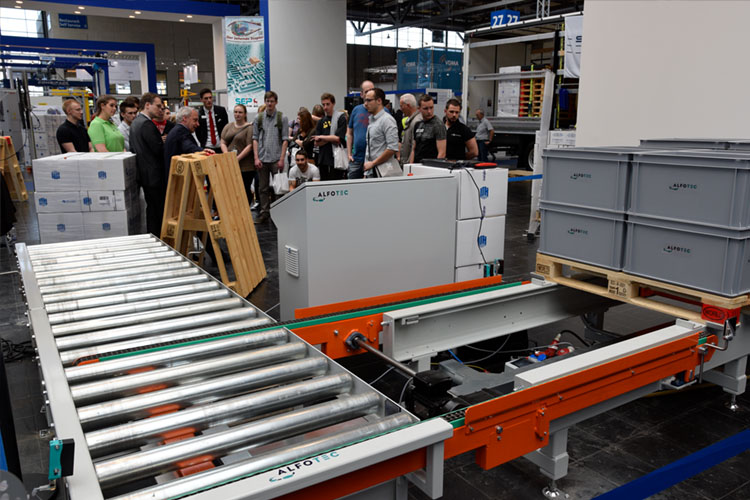 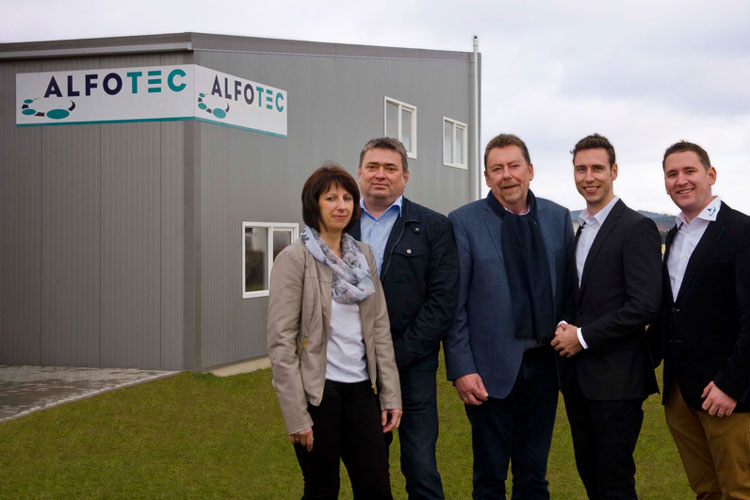 In 2015, the ALFOTEC Group will be expanded by another company – ALFOTEC Sachsen GmbH, based in Großröhrsdorf, 30 km north of Dresden. The managing director Thomas Wolnik aims to create additional capacities for the ALFOTEC Group, to further optimise customer service in terms of speed and flexibility and to expand the business area of special machinery construction. 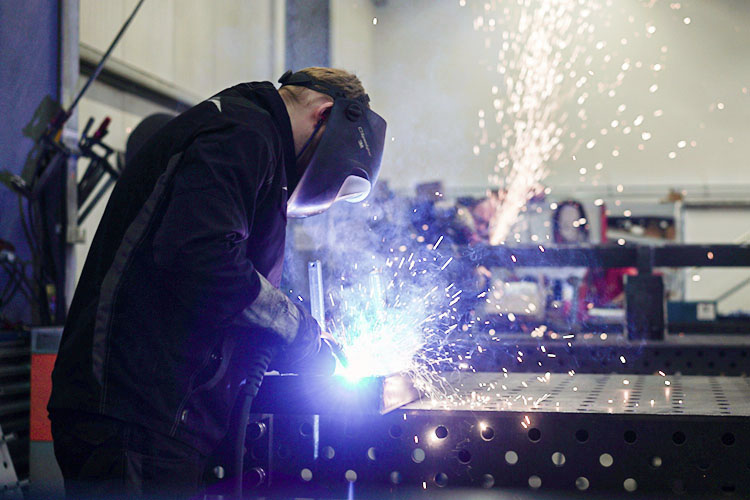 After the foundation in 2015 and a short construction period, production starts in the 700 sqm large, modern production hall with design office and administration. It is located on a 7,000 sqm large, company-owned property. In the future, the building can be expanded to a production area of up to 4,000 sqm. 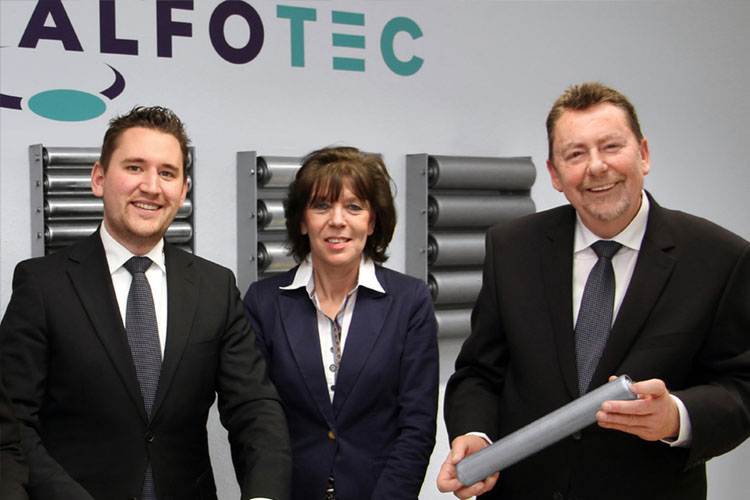 After many years of sales activity, Lukas Hackländer becomes additional managing director. In this function he supports his father and company founder Michael Hackländer. 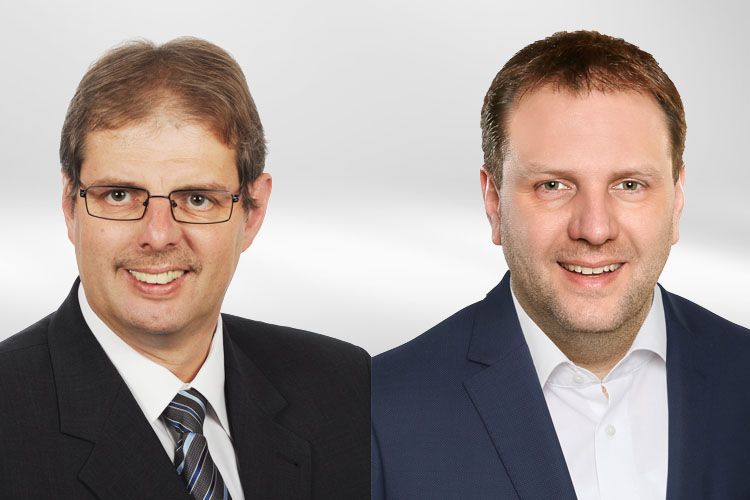 Co-founder, shareholder and managing director Albrecht Happel is taking his well-deserved retirement and hands over his position as managing director to Oliver Becker, who has also been working for the ALFOTEC Group for many years. 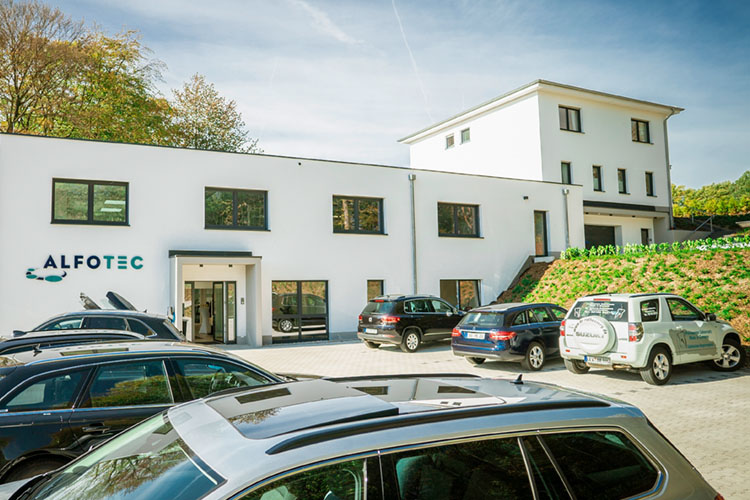 On Albert-Einstein-Strasse – in the centre of the industrial area – ALFOTEC GmbH acquires a 5,000 sqm plot of land on the opposite side of house number 12. A modern and representative multi-storey building is erected on the company premises, which were deliberately designed with a lot of green space. It provides an office space of 700 sqm and offers space for up to 30 employees. 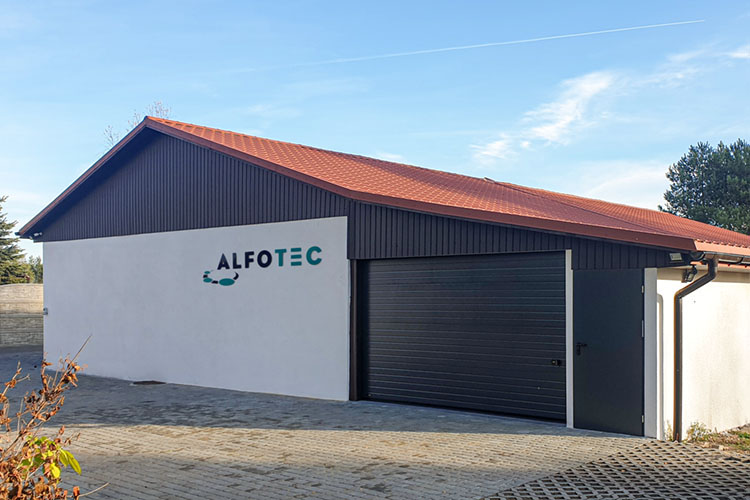 At the beginning of the year ALFOTEC Poland Sp. z o.o. is founded with headquarters near Katowice. The managing directors Jacek Gorzkiewicz and Dominik Sznicer together with their team create a new production capacity in a production hall with design office and administration on an area of 340 sqm. With an in-house production, the team of ALFOTEC Poland Sp. z o.o. forms the particularly experienced assembly team of the ALFOTEC Group. 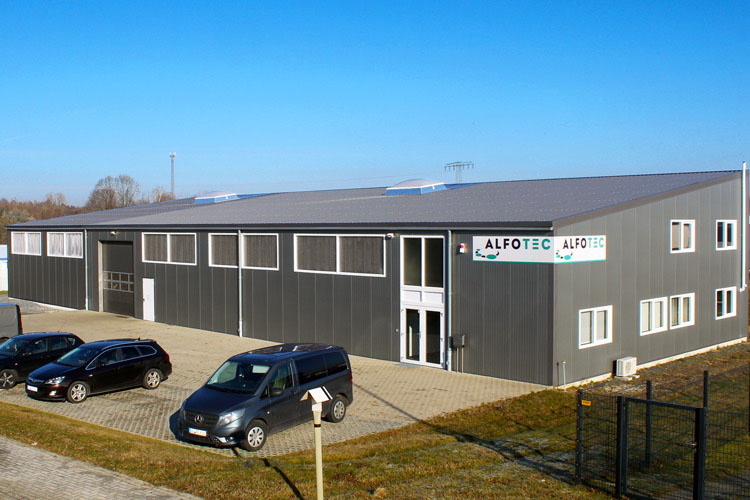 The group member founded in 2015, ALFOTEC Sachsen GmbH, is expanding. Originally, 5 employees manufactured customer-specific conveyor systems there. Due to the increasing demand, also for standard conveyor technology products, the modern production hall is extended to 800 sqm and the number of employees is doubled.

Back to overview
The ALFOTEC Group continues to grow