The company REISS Büromöbel GmbH is an innovative manufacturer of modern office furniture and specialises in particular in ergonomic workstations. In addition to ergonomics, it also pays attention to acoustic emissions, hygiene and sustainability in production and the entire company. Founded in 1882, the company initially sold office aids as well as surveying equipment before developing the first sitting/standing table in Germany in 1910 by manufacturing drawing machines and office furniture. At the end of the 20th century, the upheaval and focus on office furniture took place, which today makes REISS an established company for office workplaces.

The task: An ergonomic assembly line

In a new plant, which the REISS company built in Lausitz, the innovative but also ergonomic idea of the company was to be continued. For this reason, a work-friendly assembly line was conceived as a production line, on which the heavy tables were to be assembled, tested, packed and assembled ready for dispatch step by step. These processes were to be carried out by assembly workers on the conveyor system without having to transport the bulky tables under their own power. In the assembly sequence, the table should be brought to different working heights in different process stages. It should be made as comfortable as possible for the employees to attach the various attachments of the table extension stages, such as electrical height adjustments, cable ducts, leg room panels, etc. and to subject them to a function test. As the ever-growing trend towards individualisation was also taken up by REISS, they have a large number of additional accessories in their portfolio. For this reason, the assembly line series already divided into “electromotive stand-up/sit-down workstations” and “standard tables” was again doubled for the electromotive workstations to be individualised. In addition, there was the challenge that initially only a first expansion stage, which only provided for the electrical assembly twice, but not the remaining steps, of the system was to be erected before the system had to be easily expandable in a future step.

The solution: combinations of link belt, belt and roller conveyors with lifting table

In order to ensure that the tables could be assembled on the assembly line by employees, a stable and full-surface system had to be chosen. Apron conveyors were the best solution, because they can take high loads not only over a large area but also at specific points for short periods. Thus, apron conveyors were provided at all workstations in the assembly series, such as mounting the base on the frame, laying the electrical cables, etc. 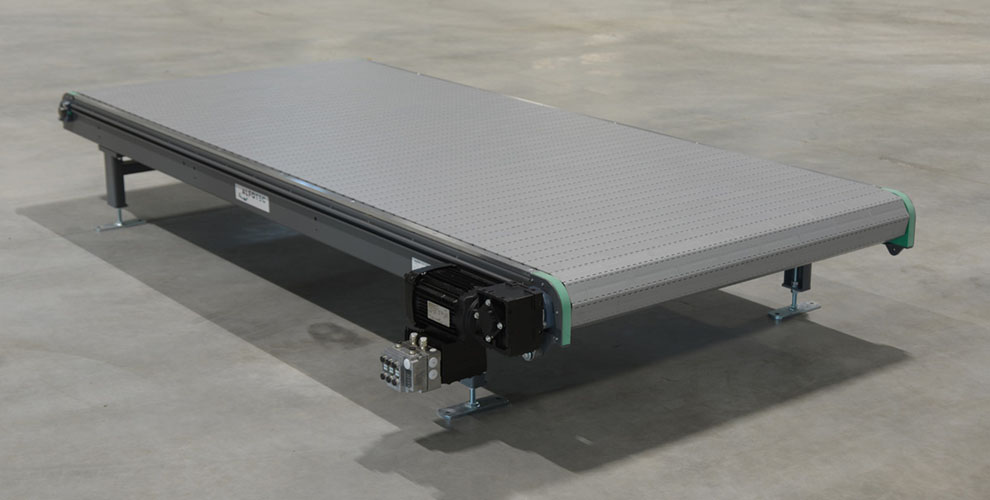 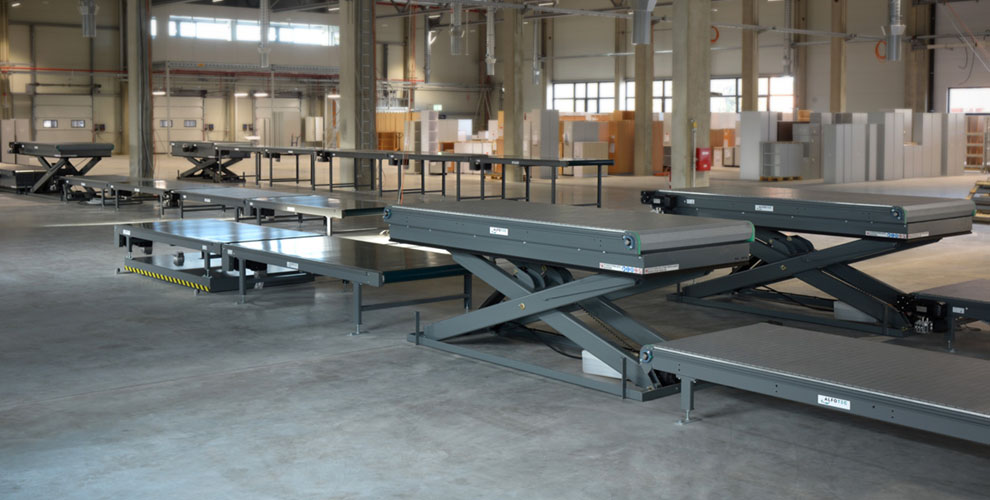 This system was also chosen for the functional test following the electrical installation, but it was supplemented by one of a total of five lifting tables. On the one hand, this serves to ensure ergonomic work for the fitters, but on the other hand it is also intended to lift the table to the next working height. If the conveyor system is still at a lower working height of 400 mm up to this point, the tables will have to be mounted at a higher level of 600 mm in the next steps, which is why the lifting table will move to this level.

Since two assembly lines run identically next to each other up to the section of the function test, but the subsequent sections are only planned as simple for the time being, a transport from the left to the right section had to take place. This was implemented by means of a traversing carriage that travels back and forth between the two sections and transports the tables from the pre-assembly line to the subsequent work steps. 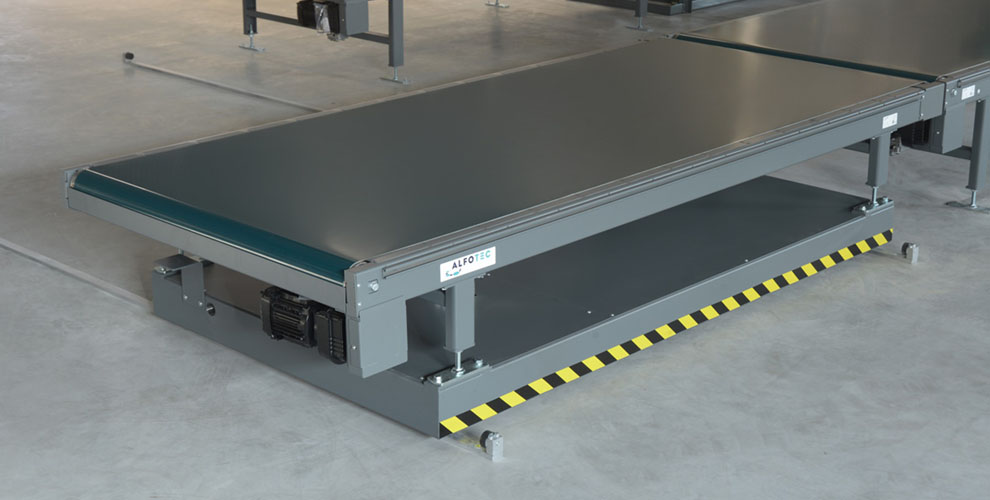 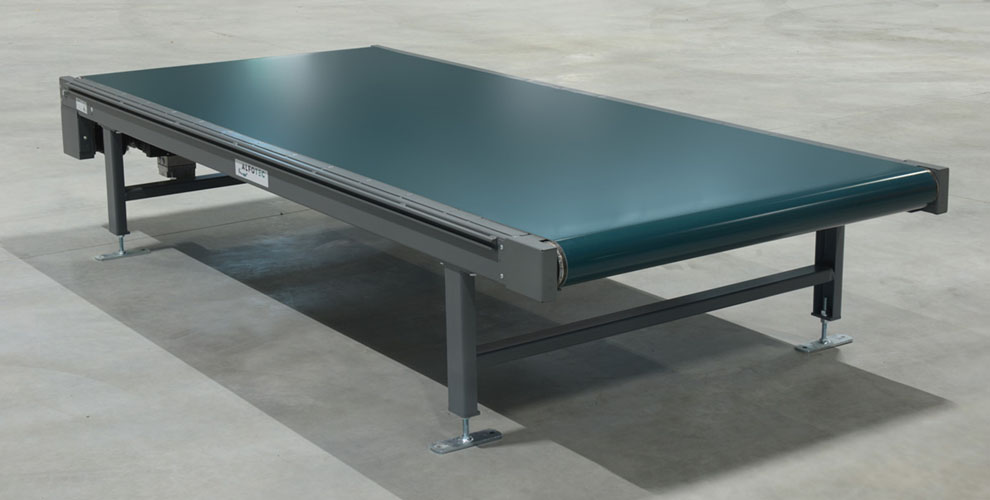 After each assembly station there should also be a buffer space for intermediate storage of the tables, which is why somewhat lighter belt conveyors were used here.

At the end of the assembly line the finished tables were to be packed and wrapped for further transport, which was done by a machine provided by a supplier. For this purpose, it was necessary that the conveyor at the packaging station could be adjusted in height, which is why a lifting table with an apron conveyor was again the optimal conveying element. 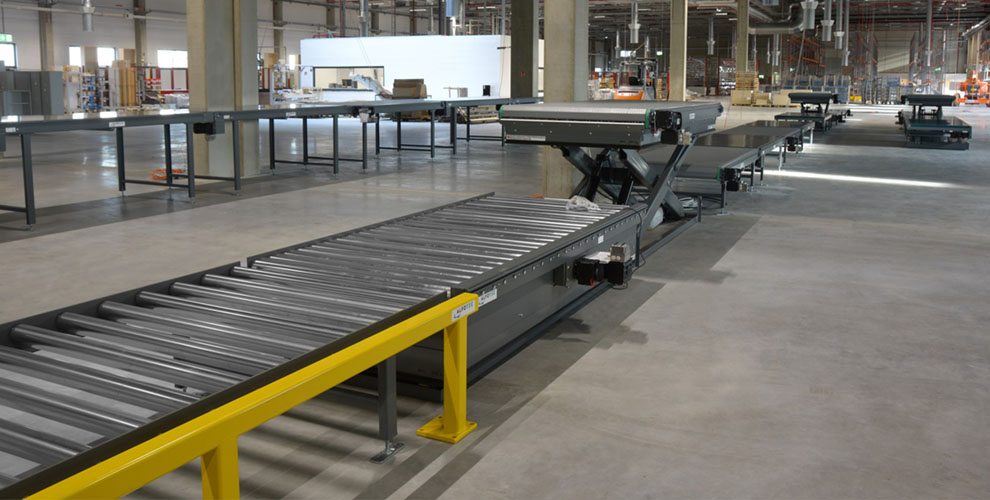 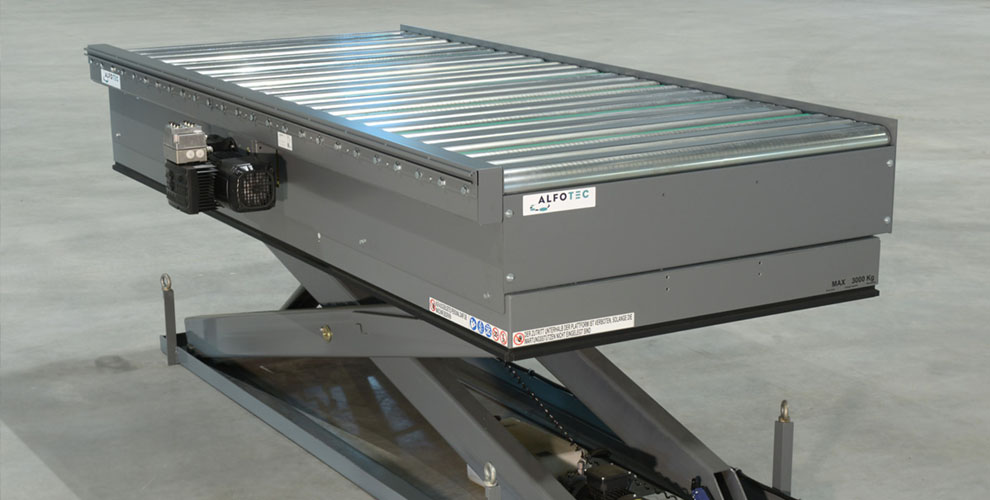 In the last step the ready assembled and packed table should be prepared for stacking. For this purpose, the table had to be lifted by means of a lifter integrated in a roller conveyor to enable the employee to lift the table by means of a gripper and thus stack it on the downstream roller conveyor. However, since these stacks will be up to three tables high, the lifting roller conveyor itself had to be adjustable in height, which is why it was also reinstalled on a lifting table that can move to three predefined positions, thus enabling easier transfer.

The production line of the standard tables was identical in construction, only that the work steps of frame and electrical assembly could be omitted, making it much shorter.