The task
A company in the field of interior fittings, facade construction and insulation technology commissioned us to build a conveyor system. This was to palletise 6,000 mm long fibreboards, which were sawn into smaller pieces, on a special wooden pallet to save as much space as possible.

The Solution
The conveying process in the video 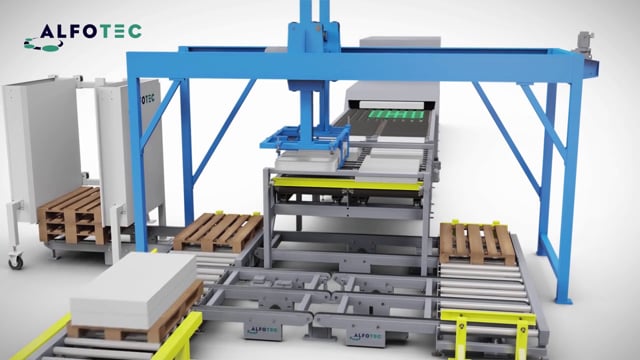 The conveying process in detail

As the stacks have to be quickly lifted out, turned (max. 24 sec. / 2 stacks) and set down, a turnstile with Maltese cross gear was used. This is because it can turn 90° very quickly and precisely, start and brake gently and position the piles exactly on the pallet..

1. Two stacks of fibreboards move crosswise from a saw (not shown) to the feeding station.

2. A turnstile between the rollers lifts the stacks and turns them by 90°.

3. Then a stack is lifted again on the next roller conveyor and moved by a transverse shift. This separates the stacks.

4. At the end of the roller conveyor line the stacks are gripped and palletized. Important: Only one pallet at a time is fully stacked at a time!

5. The following procedure is provided so that the stacking process is not interrupted.

When stacking area 1 (following SP1) is full (the case in Fig. 5), the gantry system (PS) changes to SP2 with the stacking process on the empty pallet. The full pallet on SP1 moves to the delivery place (following AP), where it waits to be picked by a forklift truck. Then two pallets from the pallet dispenser move to SP1 and the reserve storage area (subsequently RP).

The customer was so satisfied that – after having invested about € 250,000 in this project – he extended the conveyor system only nine months after commissioning. The reason for this was that after the small-format gypsum fibre boards, the company now wanted to fully automate the palletising of large formats – with one and the same system. The ALFOTEC solution: We supplemented it with two gantry systems.

Grippers equipped with suction cups lift the boards (which are located on the roller conveyor already existing since expansion stage I) at an angle in order to release the vacuum between the boards lying flat. They then lift the panels vertically and transport them horizontally to the newly added lifting table opposite. A special wooden pallet is positioned on top of this, on which the panels are stacked with a tolerance of 0.1 mm up to the desired filling height or number of pieces. As you can see in the video, modern barrier techniques such as lifting gates and barriers ensure the safety of the employees.

With the expansion stage II, several goals were successfully implemented: The full automation of the palletizing, which was previously carried out manually in 3-shift operation, saves enormous personnel costs – with a noticeably higher capacity. In addition, the stacking quality has been significantly improved and is now – as desired – reproducible.

2. Scope of supply and services 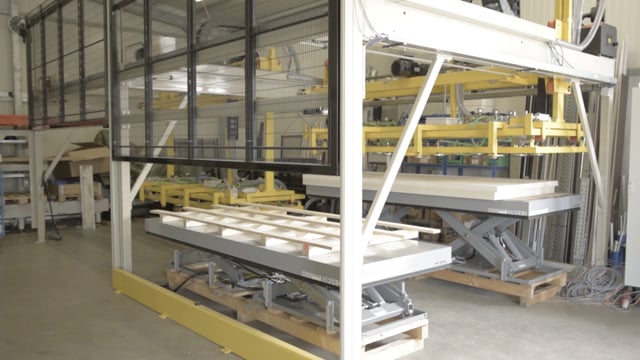